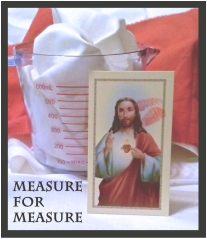 About the Characters (Chicago version)
Duke Vincentio - the Duke of Vienna, into cosplay (dresses up like a Friar)
Escalus - a wise lord
Lord Angelo - a strict lord and the Duke's temporary replacement, very religious but has a thing for redheads
Mistress Overdone - runs the Best Little Whorehouse in Vienna
Lucio - frequent buyer at aforementioned Whorehouse, Claudio's bro
Claudio - Isabella's brother, Juliet's (unborn) Baby Daddy
Provost - runs the prison, really, really nice
Friar Thomas - a real Friar
Isabella - a novice in a nunnery, Claudio's sister, a redhead
Francisca, a nun - a nun in a nunnery
Bernardine - a criminal, incarcerated but not yet condemned
Mariana - Angelo's former love fiance (they were hand-fasted - it totally counts, he like dumped her because she went from being rich to poor)

Sean Driscoll (Provost) is thrilled to be a part of Stone Soup Shakespeare's reading of Measure for Measure. Last year he read Lord Longaville for Stone Soups reading of Love's Labour's Lost. Sean also had the privilege of playing Lysander in Stone Soups 2012 production of A Midsummer Night's Dream. Sean would like to thank his friends and family for their love and support through the years.

Nicole Goeden (Isabella) will soon be boarding a plane to pursue graduate studies in Glasgow at the Royal Conservatoire of Scotland and is excited to be bidding farewell to the Windy City in style with this, her 4th Stone Soup Shakespeare staged reading. Earlier this year she served as Celia in As You Like It  (Tour 2014) and Tamora in Titus Andronicus. Previously she has been seen with Stone Soup as a King, a fairy, a lover a drunk and a Princess.  Chicago credits include Jade the Ozian in The Wizard of Oz (Compass Creative Dramatics) and Pocahontas in The Indian Princess: An Operatic Comedy (Schlock Entertainment) and is a touring ensemble member of Shakespeare All-Stars.  Before moving to Chicago she performed with various companies in Minneapolis/Saint Paul and the Washington, DC area. Nicole holds a BA in Theater from the College of Saint Benedict (Minnesota) and is an Artistic Associate with Stone Soup Shakespeare.

Katie Lyn Hardt (Mariana) is very excited to be a part of this staged reading of Measure for Measure with Stone Soup Shakespeare! After graduating from Millikin University with a BFA in theatre, she moved to NYC to pursue acting. Three years later, she has made a home in Chicago, and couldn’t be happier. Some of her favorite past roles have been Amneris (Aida), Narrator (Joseph...), Truvy (Steal Magnolias), and Agnetha (Frozen). Love to her family and friends!

Carl Herzog (Claudio/Friar Thomas) is thrilled to be performing in Stone Soup Shakespeare's production of Measure for Measure. Carl enjoys new works and readings with Chicago Dramatists, recently with the Citizens new play festival, and will be performing in the new work Down Range with Genesis Theatrical Productions next month! Big thanks to Julia and Ken for this wonderful opportunity! Love to Mere.

Chad Ramsey (Lord Angelo) is excited to be participating in his fourth Stone Soup Shakespeare staged reading, having acted in three readings and directed this past spring's read of Titus Andronicus.  Chad was also seen on tour with Stone Soup as Oberon and Theseus in the 2012 tour of A Midsummer Night's Dream.  Chad has performed on Chicago stages with The Artisitic Home, Eclipse Theatre, Hell in a Handbag, and Redmoon, to name a few.  After seven lovely years, Chad will be relocating to Austin, Texas in August, so please relish this final opportunity to boo and hiss at his evil antics as Angelo!

Julia Stemper (Mistress Overdone/Francisca, a nun/Barnardine) is tickled to be starting the 5th Season of Stone Soup Shakespeare with such an amazing group of talent. She was last seen as Rosalind in the 2015 Tour of As You Like It. Stone Soup credits include The Tempest, A Midsummer Night's Dream, Romeo and Juliet and multiple staged readings. In Chicago she has had the privilege of also working with Filament Theatre, Ka-Tet Theatre, The Plagiarists, First Folio, Red Tape and Lifeline Theatre. Before transplanting to Chicago Julia completed her Masters at the Royal Conservatoire of Scotland in Glasgow. Julia also has had gobs of fun performing in Washington, DC; the Twin Cities and Dublin.

Dan Wenzel jr. (Lucio) is very excited to work with Stone Soup Shakespeare for the first time. Last year, he graduated from the University of Illinois at Chicago with a BFA in Theatre Performance. At UIC, he could be seen in such shows as Full Circle, Cloud 9, and The Foxy Widow. Other theatrical credits include Men Exposed at Redtwist Theatre, A Midsummer Night's Dream at Piccolo Theatre, and The Jewels workshop at TUTA. Film credits include Phantom Power with Next Up Productions, and the web-series Rent Controlled with tello Films. He can also currently be found in Stoop Feast Theatre's production of Shoe Dogs, playing now until August 3rd at the Athenaeum Theatre. He would like to thank his friends and family for their support, and Stone Soup for this opportunity.

Sally Wippman (Escalus) is excited to join Stone Soup Shakespeare at the Globe Pub once again.  Most recently, she has been working with Harper Theatre Ensemble, where this past spring she took on the role of Lisa in Collected Stories. This fall, she will be assistant choreographing their production of Fiddler on the Roof.  Sally is most excited, however, to take her theatrical passions to Tuscany in just two weeks for the CrisisArt Festival!

Ken Miller (Director) is an Artistic Associate with Stone Soup Shakespeare and has performed with them in A Midsummer Night's Dream and The Tempest. He is thrilled to be directing this reading with such amazing actors though he is still totally unsure why anyone is listening to him. To see him on the stage you should catch him in The Hamlet Project: Chicago (Round 5) running now OR hanging out with The Plagiarists in Season Pass (a choose your own adventure theatrical experience) OR hold your breath even longer and see him in the 2015 Stone Soup Shakespeare Tour of Much Ado About Nothing. Oh and like Some Guys I Know on Facebook and you might just see him in a video: https://www.facebook.com/SomeGuysIKnowProductions.