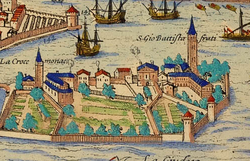 About the Characters
Duke of Venice - the Duke of Venice, duh
Antonio - the Merchant of Venice
Bassanio - Antonio's friend and a playboy
Gratiano - Bassiano's friend
Shylock - a Jewish moneylender
Solanio - Antonio's friend
Salarino - Antonio's other friend
Launcelot of Gobbo - first a servant to Shylock, then a servant to Lorenzo, kinda whiny if you ask us
Old Gobbo - Launcelot's father
Lorenzo - yet another friend of Antonio's (he's also friends with Bassanio and very friendly with Jessica)
Balthasar - a servant to Portia
Tubal - Shylock's friend
Prince of Arragon - a prince that likes gold
Prince of Morocco - a prince that likes silver
Portia - a wealthy and beautiful single lady from Belmont
Nerissa - Portia's friend
Jessica - Lorenzo's really good "friend," and Shylock's daughter

Molly Bunder (Portia) is a Stone Soup Shakespeare company member who has done readings of Love's Labour's Lost, The Comedy of Errors (Glasgow) and King John (Chicago).  She is a resident artist at Filament Theatre Ensemble, where she has appeared in Lifeboat, Sherlock Holmes, Monster in the Hall, and The Snow Queen.  She has also worked with TUTA.   In Scotland, she's performed at The Arches, Tron, and Byres St Andrews.  She trained at the Royal Conservatoire of Scotland.

Christina Casano (Salanio/Prince of Morocco) is a theatre artist based in Chicago.  Having graduated from Miami University with a BA in Theatre, she is an alum of the Shakespeare Theatre of New Jersey's Summer Professional Training Program. She has worked in many capacities in the theatre, with her selected work including These Saints Will Burn with The Plagiarists, Owners with Interrobang Theatre Project, Fallen Angels at STNJ, and Macbeth, Angels in America Pt. 1: Millennium Approaches, Twelfth Night, and Independence at Miami.

Mara Dale (Jessica) is excited to get the opportunity to work with Stonesoup! She is a company member at Filament Theatre, ensemble member with Barrel of Monkeys, and has locally performed with Waltzing Mechanics, Emerald City Theatre, First Folio, Muse of Fire, and Jedlicka Performing Arts Center. Regionally, she's worked with New York Stage And Film, as well as Syracuse Stage. After attending Syracuse University (Acting BFA) and studying at Shakespeare's Globe Theatre in London, she's glad to be back home teaching and acting in Chicago.

Lindsey Dorcus (Salarino/Prince of Arragon) is excited to work with Stone Soup for the first time!  She is a Resident Artist with Filament Theatre, where she has appeared in The Monster in the Hall, Cyrano, The Snow Queen, Orpheus, and many others.  She has performed locally with Strawdog Theatre (The Duchess of Malfi and The Good Soul of Szechuan), The House Theatre (The Magnificents), The Building Stage (The Ring Cycle), Lifeline, Hearts & Brains, Redmoon, the Skokie Symphony Orchestra, and others.  Lindsey is also a Company Member with Barrel of Monkeys, and you can often find her saving the world in their Monday night show, "That's Weird, Grandma!"  Up next, she will be appearing in Filament's adaptation of Fog Island this September/October.

Joe Feliciano (Antonio) is tickled pink to be working with the fine folks at Stone Soup Shakespeare. Joe was seen in Transcendent Ensemble Theatre Company's production of Hamlet, where he played Polonius.  Favorite roles include Michael from Two Rooms, Andrei from Three Sisters and Belarius from Cymbeline and Lucian Rock from Lydie Breeze -- where he met SSS's Julia Stemper! FUN FACT: In January 2016, Joe can be seen in (the audience of) London's West End production of The Winter's Tale starring Dame Judi Dench.

Marissa Ford (Nerissa) is a Chicago native and alumni of the Drake University BFA  Acting program. Credits include The Tree that Grew Human, Standing on My Knees, Fefu and her Friends, Urinetown, and choreography for A Fiery Destination. Marissa was a member of the 2014 Stone Soup Shakespeare Tour of As You Like It.

Jake Jones (Lorenzo) has been in many Shakespearean productions including Hamlet and Romeo & Juliet at Chase Park Theater, Love’s Labour’s Lost at Oak Park Festival Theater, Twelfth Night at Actor’s Theater Columbus, and Hamlet with Suitcase Shakespeare. He has also worked and trained with the Shakespeare Theatre of New Jersey. Other Chicago credits include shows with Circle, Commedia Beauregard, Greatworks, Alphabet Soup and City Lit. Jake has appeared in shows at CATCO, Ovation, and the Cincinnati Fringe fest in his home state of Ohio. When not performing, he often teaches acting and improv for children. This is his third Stone Soup Shakespeare reading (King John and Measure for Measure being the others) and was a member of the 2013 Stone Soup Shakespeare Tour of The Tempest. Jake is a proud graduate of the University of Cincinnati’s College Conservatory of Music (CCM) with a BFA in Acting.

Tony Kaehny (Old Gobbo/Balthasar) started his Chicago stage career in 2008 when The Plagiarists gave him his first stage role in Promiscuous Stories (Directed by artistic director Gregory Peters.) After that he fell in with The New Colony, where he originated the role of Bennett in their original work, FRAT. He then went on to work with Collaboraction, appearing in Play by Play (by Play) as part of Sketchbook X. Then, after playing David in Point of Contention's Chaos Festival V, he appeared as Dwight in their production of Apocalyspo at the cozy BoHo Theater. He had another chance to work in that intimate space when he was cast as Dapper in Nothing Special's production of The Alchemist, directed Jack Dugan Carpenter. He played Orlando in Strangeloop's As You Like it (A New Adaptation) and the villainous Roy in The Factory's Toast of the Town. He was directed once again by Jack Dugan Carpenter when he tackled the role of Duke Vicentio in Measure for Measure with the St. Sebastian Players. Other recent credits include Burning Rubber and Some Things Stick (Vivarium Theater Company) and these saints will burn (The Plagiarists).

Sara Jean McCarthy (Shylock) grew up in northern Minnesota swimming in the lake and being bewitched by the northern lights. Since that is clearly not a viable career choice, she decided to go to Acting School. Sara moved to Chicago to attend the Theatre School at DePaul University a lot of years ago and has been happily playing around in the vibrant and uber-supportive Chicago community ever since. She has worked with The Griffin, The Hypocrites, Caffeine Theatre, The House, Boho Theatre Ensemble, and Run-a-Muck productions, among others, and has dabbled in some tv and film work as well.

Isaac Samuelson (Tubal/Duke of Venice) graduated the University of San Francisco with a BA in Performing Arts and Social Justice. He also attended the American Conservatory Theatre's Summer Training Congress in 2009. You may have seen him bouncing around town performing for children with Imagination Theater, the Shakespeare All Stars and Chicago Danztheatre Ensemble. Most recently he was Blazes Boylan in the Whiskey Rebellion's production of Ulysses 101.

Ben Schlotfelt (Launcelot of Gobbo) was born and raised in Iowa. After graduating from the University of Iowa with bachelor degrees in Theatre and Film he moved to Chicago to pursue acting. Recent Chicago credits include The Most Ado; A Party Play (Much Ado About Nothing adaptation), Yikes! There's a Phantom at the Opera, King Ubu and Stone Soup Shakespeare's 2014 Tour of As You Like It. He is very grateful to the talented performers he's gotten to work with during this run and for putting up with his bad puns and whatever else may annoy them. I'm sure it's been worth it. He is also very thankful to his employers, friends, and (most of all) family; all are essential in making this a possible venture for various reasons too numerous to get into.